Why walk into a bedroom when you can walk into your favourite team’s stadium?

This is the question we asked ourselves over 2 years ago. If we could turn the four walls of a bedroom into the four sides of a stadium, it would feel like you were standing in the middle of the pitch! For us this would be our ultimate bedroom. Or games room, man cave, office, meeting room, event space.

And so began Arenaroom, the world’s first 360° stadium wallpaper.

It took 2 years of R&D to create the online technology and find the perfect combination of inks and paper to deliver the experience we wanted. Shot with a super high-definition camera, we capture the complete 360° of each stadium in absolute detail. The panoramic stadium image on our online room planner adjusts perfectly to the measurements of your walls. Its unique technology means the corners of the stadium always match the corners of your room.

So whether you want a stunning, single, feature-wall, or to surround yourself with a 2, 3 or 4-wall Arenaroom, you’ll always feel like you’re in the middle of your favourite stadium. And our high quality, 225gsm wall covering with superb print definition and high colour vibrancy, means you'll enjoy every detail of the stadium, like you're really there.

We’ve also made sure our wall coverings are easy to install, with our How-to video. The paper is water-activated, so no paste is required. It even arrives in the bath box you use to soak it. However if you don’t want to get your hands dirty, we can recommend an installer local to you.
Just call us on +44 (0) 203 935 7090, or email us at ben@arenaroom.com.

Our online ordering process is easy too, however we also offer a more personal 1-to-1 service, including measuring up, installation, and a wider range of wall coverings.
Again call us on +44 (0) 203 935 7090, or email us at ben@arenaroom.com.

Arenaroom started in about 1985.
Ben was at school and iambic pentameter wasn’t really doing it for him. So in class he found himself drifting off towards things that did.
That meant sport and for some reason, stadiums.

He’d started going to watch his team, Chelsea, regularly. He loved the atmosphere and excitement of Stamford Bridge on match day. Hearing the distant chanting as he walked to the ground; the first glimpse of the floodlights. He found he also had an interest in the stadium itself. Not the specifics of the engineering, but the character of the ground and what a sight it was when full of people. He loved how random the stands were at the Bridge. The huge East stand towering over the rest of the ground. Cars parked around one section of the pitch. The Shed End, where he stood (west side), that rose to meet the West stand. And the away end, a vast, bleak, exposed terrace, that not even Manchester United could fill when they visited. He found himself sketching Stamford Bridge in class. Then other grounds. 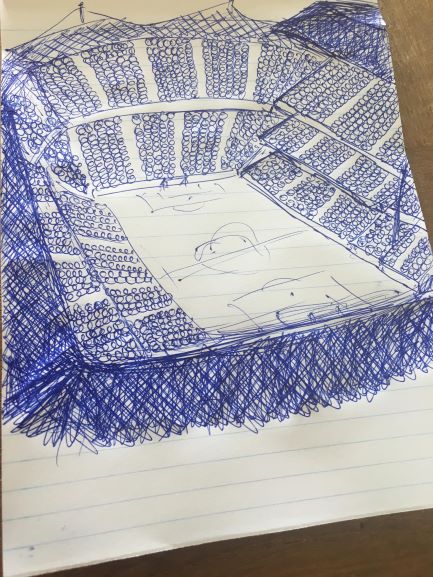 Each had it’s own character. Often built to squeeze into backstreet locations, the stands were shaped by the space available. The combination of seating and standing areas differed from ground to ground. Traditionally, standing areas were at the ends, with seating at the sides. But often this was mixed up, creating different sites, sounds, atmospheres and dynamics. The vast three-tiered ‘Shelf’ that ran the length of White Hart Lane - the bottom two tiers standing, with seating on top. An unbelievable sight when full. The Anfield Kop, swaying and surging en masse. The Spion Kop at Hillsborough, disappearing back into shadow. The Holte End at Villa Park. Enormous! Smaller, higgledy-piggledy grounds like The Dell and Filbert Street.

Ben bought a book about English football grounds and learned more. He was interested in which could hold the most fans, and particularly which had the biggest terracing (Charlton Athletic’s East terrace at The Valley). 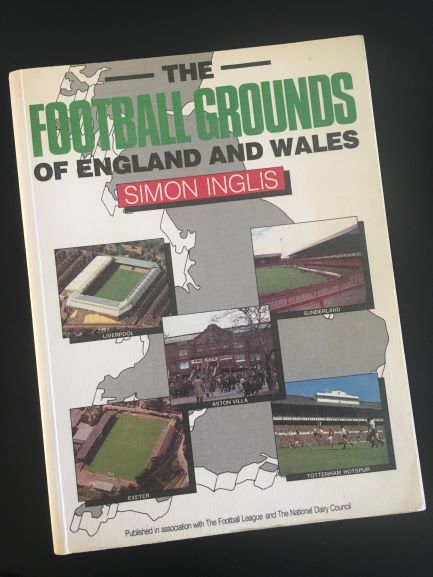 As his interest grew he discovered amazing stadiums from around the world. The Nou Camp, the Bernabeu, the San Siro (with turrets!). As a big cricket fan he marveled at the 100,000-seater MCG in Melbourne and the huge Indian test grounds with their unorthodox structures. Some of the most incredible stadiums can be found in US sports. The sheer scale was like nowhere else. This place didn’t just have one Wembley, every city had a Wembley! Even college teams had 100,000 seater stadiums.
But they were all different, all with a distinct character and feel.

From those days sketching in class, his love of stadia has always been with him.

Fast forward to 2006 when Ben had an idea.
What if we could create 360° wallpaper that turned the four walls of a bedroom into the four stands of your favourite stadium, so it felt like you were on the pitch?

The idea sat at the back of his mind until 2016, when, frustrated running an advertising agency in Amsterdam, Ben started chatting about it with his brother Joe. Joe had launched businesses in the past and whilst working in Private Equity had been investing in companies and helping them grow. But he was also looking for a new challenge. So with their mutual love of sport and mutually itchy feet, they decided to explore it further.

The good news was that when they googled 360° shots of stadiums from the pitch, they couldn’t find any. It meant no one had ever done this. It also meant it would be difficult to demonstrate the idea to people. However, with the help of one or two designers they knew, they managed to create some images of a bedroom-turned-stadium. Joe crunched some numbers and suddenly they had a presentation deck to show football clubs.

That presentation deck has come a long way. We found a great team of manufacturers in Jason and Kris, who helped bring the idea to life. And now, after many months of hard graft, we're very excited to launch Arenaroom.

You may have noticed that we only have a few clubs available at the moment. But more and more will be added in the months to come, until hopefully we can offer fans of every English club their very own Arenaroom. It won’t end there though. We soon hope to bring you stadiums from different sports and different countries all around the world.

We hope you like the site and that you'll let us know what you think.
More importantly, we hope that bringing to life your favourite stadium in this unique way gives you the same thrill it gives us.